George Stephenson worked as a brakesman in Killingworth Pit and the District badge depicts a locomotive from Stephensons era.

The District is growing in numbers and currently has over 250 young people regularly taking part in Scouting activities.

Blyth Valley Scout District covers the South East area of Northumberland and includes the towns of Cramlington and Blyth together with the villages of Seghill, Seaton Sluice and Seaton Delaval.

The District was formed in 2000 following the amalgamation of Seaton Valley and Blyth District. Currently the district operates 10 groups covering Cramlington, Blyth, Seaton Sluice and Seaton Delaval, while also operating an Explorer Scout Unit along with a successful young leader scheme. The district also boasts a fully active Network Unit and also runs the Duke of Edinburgh Award programme. Every other year the district presents its popular Gang Show.

Blyth Valley operates two campsites, one at Selby Wood, Stainton, Morpeth and the other a basic Greenfield site at Hartford, Cramlington. The district also has a camping cottage at Spylaw, Rothbury. The district has its own headquarters in Blyth and another building in Seghill

Castle Morpeth Scout District Castle Morpeth is a large rural Scouting District in Northumberland County.  The area extends from Hadston and Chevington in the north-east corner, to Stannington at the south-east, Heddon-on-the-Wall in the south-west and Otterburn in the north-west.  It includes the major towns of Morpeth and Ponteland.

The District has two Explorer Scout units meeting at Ponteland and Morpeth.

The City of Newcastle Scout District is co-terminus with the area covered by the Newcastle City Council.

The District was formed in 2011 by the amalgamation of the former Great North and Newcastle East Districts.

A Scout Network is based in Fenham and provides opportunities for the 18 — 25 year old age group to continue their Scouting and provide service within and outside the Movement.

The District Scout Active Support (Red Scarf) Unit provides a focus for those over the age of 18 to support Scouting in the District, in particular the Newcastle Gang Show and the organisation and leading of the Lookwide Walk.

Hadrian Scout District is situated to the West of Newcastle upon Tyne and is geographically the largest District in England.

It was the location in 1908 of “Lookwide”, the first ever National Scout Camp at Fourstones.

The vast majority of the District is rural yet Scouting takes place right along the Tyne valley. The main attraction is Hadrian’s Wall and many Scouting visitors use the District Camp Site at picturesque Dilston.

Mid Northumberland Scout District is a rural area with many small villages.

Scout Groups are based in Alnwick, Felton, Amble, Longhoughton and Rothbury, with two Explorer Units taking members from all Groups. The District successfully runs the Duke of Edinburgh Award and Young Leader Scheme encouraging our young people to get involved with younger sections as well as out in the local community, as they truly are great role models.

This position is currently vacant. If you require any support please email Peter Thorp. [email protected]

A Scout Network based in Tynemouth provides opportunities for the 18 – 25 year old age group to continue their Scouting and provide service within and outside the Movement.

The District has 3 Scout Active Support Units: Powburn, Fellowship and Gang Show, these Units provide a focus for those over the age of 18 to support Scouting in the District, in particular the Tynemouth Gang Show.

This position is vacant. If you require any information please get in touch.

Scouting thrives in the Wansbeck area with Scout Groups in Newbiggin, Ashington, Guidepost and Stakeford.  There are fantastic opportunities for young people aged 6 – 25 years old to gain new skills and enjoy outdoor activities such as canoeing, climbing and adventure camps.

Whitley Bay and District incorporates eleven Groups, an Explorer Unit and a Network.

Scout Groups are to be found in Cullercoats, Whitley Bay, Monkseaton and Earsdon, with each Group operating Beavers, Cubs and Scouts.

The District has its own headquarters at the entrance to Marden Quarry on The Broadway and this is where the Explorer Unit and Network meet.

Changes to the e-learning platform and certificates

You are now able to view and book onto training and events for Northumberland Scouts on the County Website. We hope this will streamline our communications and accessibility. Click on the page below t…

Following on from the success of this year’s Northumberland Scouts D of E Expeditions we have agreed dates for next year. · Bronze Training Event – Late afternoon Saturday 29th April to late afternoon… 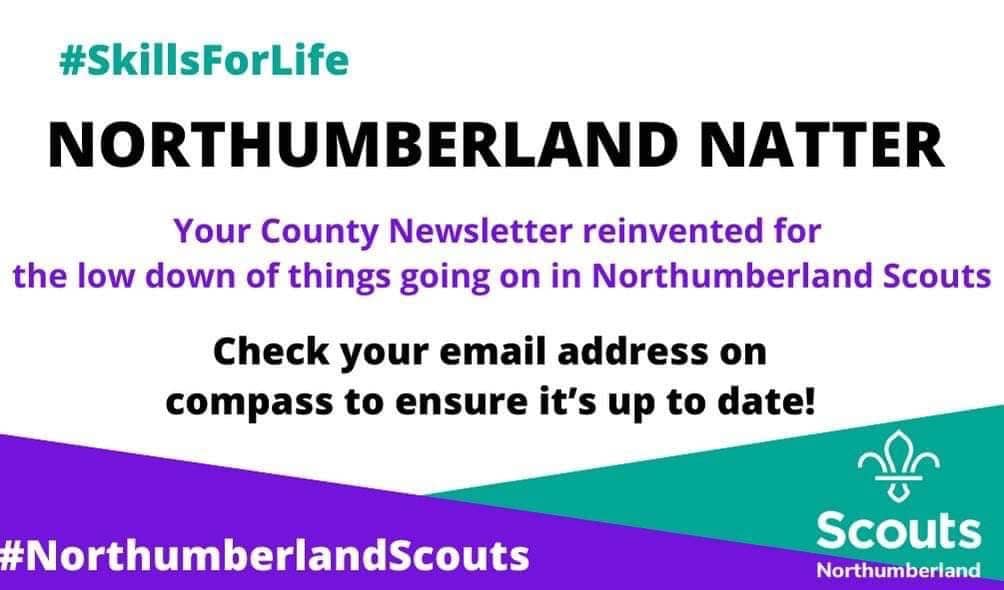 Our brand new county newsletter will be coming out very soon! Please check that your email is all up to date on compass to ensure you get the latest low down on all things going on in Northumberland S… 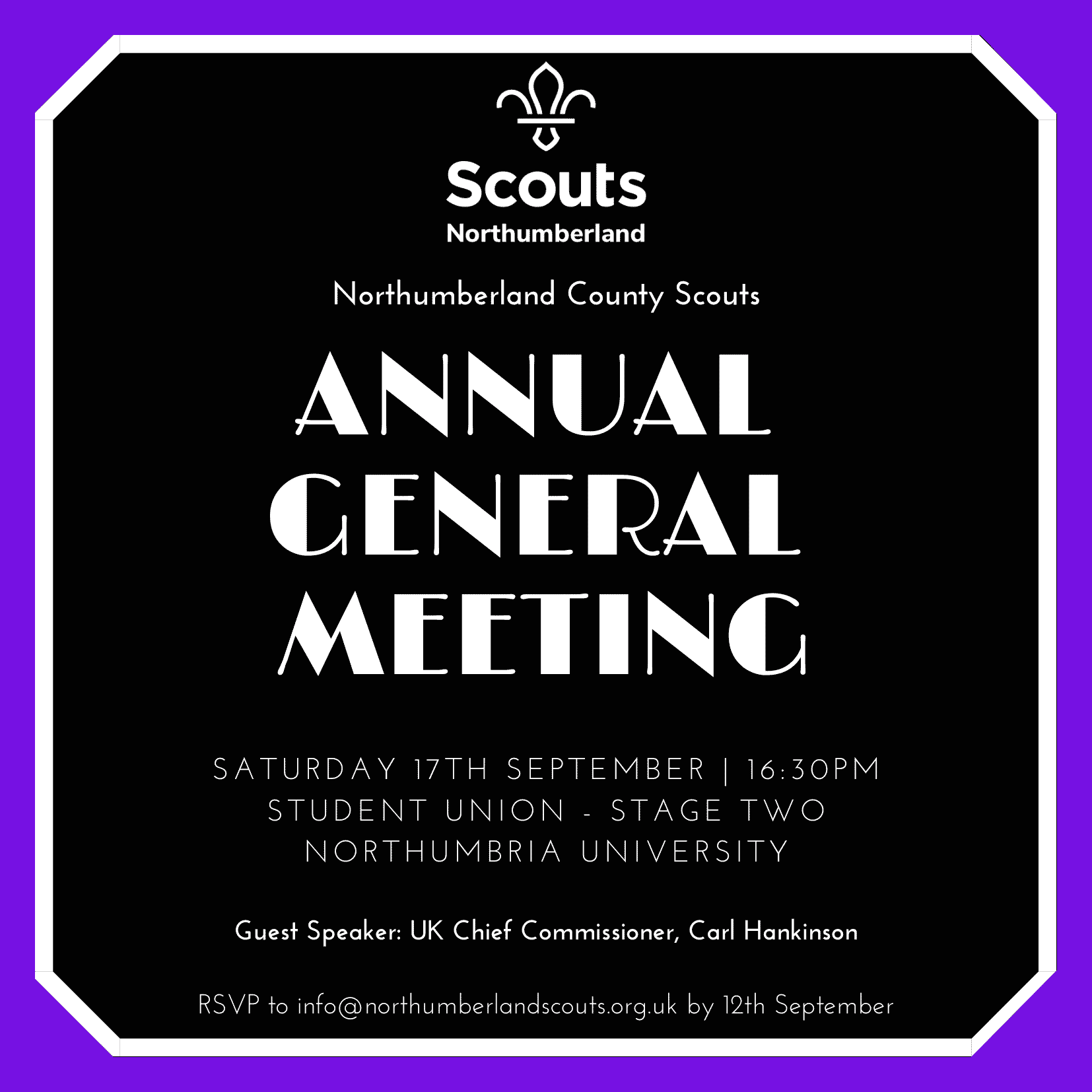 Northumberland Scouts invite you to our Annual General Meeting on Saturday 17th September starting at 16:30 at the Student Union Stage Two at Northumbria Uni. We are delighted to be joined by UK Chief…

We use cookies on our website to give you the most relevant experience by remembering your preferences and repeat visits. By clicking “Accept”, you consent to the use of ALL the cookies.
Cookie settingsACCEPT REJECTRead More
Manage consent

This website uses cookies to improve your experience while you navigate through the website. Out of these, the cookies that are categorized as necessary are stored on your browser as they are essential for the working of basic functionalities of the website. We also use third-party cookies that help us analyze and understand how you use this website. These cookies will be stored in your browser only with your consent. You also have the option to opt-out of these cookies. But opting out of some of these cookies may affect your browsing experience.
Necessary Always Enabled
Necessary cookies are absolutely essential for the website to function properly. This category only includes cookies that ensures basic functionalities and security features of the website. These cookies do not store any personal information.
Non-necessary
Any cookies that may not be particularly necessary for the website to function and is used specifically to collect user personal data via analytics, ads, other embedded contents are termed as non-necessary cookies. It is mandatory to procure user consent prior to running these cookies on your website.
SAVE & ACCEPT